History of the International Society of Oncology and Biomarkers (ISOBM): A Personal View of a Pioneer


The Origins. The International Society for Oncology and BioMarkers began in 1973 as the International Research Group for Carcinoembryonic Proteins. “This is an international group organized for improving the efficiency of mutual exchange of information between research-ers in the world who are studying cancer from the point of view of the reappearance of embryonic and/or fetal substances when the normal adult cells cancerize.” (Newsletters and References, International Research Group for Carcinoembryonic Proteins, Vol. 1, 1973) The first meeting was initiated by Hidematsu Hirai with a call from Dr. Hirai to those interested in carcinofetal protein research to attend a meeting in Sapporo, Japan, October 23-25. There were about 50 participants, mostly from Japan, but at least 6 from other countries: David Gitlin, Elliot Alpert, William Fishman (USA), Joachim Kohn (UK), Rene Masseyeff (France) and M. J. Simons (Singapore). There were 36 presentations. The main subjects were alpha-fetoprotein, AU antigen, carcinofetal and placental isoenzymes and carcinoembryonic antigen.

The second meeting was chaired by Rene Masseyeff and held under the auspices of INSERM in Nice France on March 7-9 1974 with 60 presentations. The third meeting was in Tokyo (Chairs. H. Hirai and E. Alpert) November 20-24 the same year. There were 70 participants from Japan and 30 from other countries, and 47 presentations.

The fourth meeting was held in San Diego, CA, USA May 29-June 1 (Chairs. William Fishman and Stewart Sell). There were 176 participants and 99 presentations. At this meeting the society was approved as a permanent international organization with H. Hirai as Present and William Fishman as Chair of the U.S. branch. In addition, because of the clear implications for the relationship between developmental biology and oncology the name was changed to the International Society of Oncodevelopmental Biology and Medicine (ISOBM). A list of the next 17 meetings is shown in Table 1. The history of the society would not be complete without further mention of Hidematsu Hirai, Garri Abelev and Phil Gold, the major players during the early era of cancer biomarkers.

Hidematsu Hirai (1920-1991) was born in Tokyo, Japan. After graduation from the Tokyo University Medical School he served in the Japanese Navy as a surgeon in the pacific. After the war he joined the Department of Surgery at the University of Tokyo as a resident, but there were too many surgery residents, so he changed to the Department of Chemistry. In 1964 he became Chair of Biochemistry in the Medical School of Hokkaido University. In 1965 he spent a very productive year and a half with Prof. Harold Deutsch in Madison Wisconsin. His major work was on the biological and clinical significance of alpha-fetoprotein. He received many research awards including the Abbot award or ISOBM and was president of at least five organizations including ISOBM and the International Society for Electrophoresis. One of the impressive features of the early meetings was Hidematsu singing the “Samurai Song”. (For elaboration and details see: Sell S. A tribute to Hidematsu Hirai, J. Tumor Marker Oncology. 9:1, 1994.) 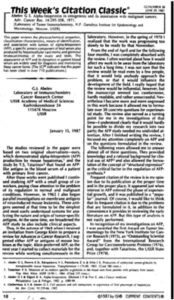 Garri Abelev. (1928-2014). Garri Abelev was born in Moscow and spent his entire life there. After graduation from Moscow University he worked with Lev Zilber at the N.F. Gamaleya Institute for Epidemiology and Microbiology where they began work to detect tumor specific antigens. In 1963 he discovered what was the first identifiable cancer marker, alpha-fetoprotein (AFP, Abelev, GI, et al. Biokhimiya 28:625-634,1963, see citation classic below). He showed that AFP is made in the yolk sac and liver during fetal development; it is not produced by adult liver but reappears when there is cancer of the yolk sac or liver. AFP became widely used for the diagnosis, prognosis and to follow treatment of patients with liver cancer and teratocarcinomas with yolk sac elements. In the 1960s, because of the high incidence of liver cancer in Africa he traveled widely there and became known world-
wide. In the early 1970’s he was asked by the government of the Soviet Union to carry out acts of espionage while traveling. His high ethical principles prohibited him from accepting this assignment. Because of this he was no longer permitted to travel and thus he was not able to attend ISOBM meetings. He was awarded an ISOBM award at the fourth meeting in San Diego in absencia. He said that the international recognition of his accomplishments, by ISOBM in particular, helped save his laboratory. Several of us boycotted the 1980 meeting in Tallin, then in the USSR, because he was not allowed to come. The Soviet Academy of Sciences came to his rescue as well and he was awarded the State Prize of the USSR in 1978. This helped mitigate the effect of the KGB. A few years later he was relieved of these restrictions and we were delighted that he could again take part in ISOBM meetings.

Phil Gold. (1936- ) Phil was born in Montreal and spent his life there. He attended McGill University where he obtained a B.Sc in Physiology in 1957 and an M.D.C.M and M.Sc. in 1961. After a year of rotating internship and another year of residency in Medicine he spent 2 years in the laboratories of the McGill University Medical Clinic where he obtained a Ph.D. The title of this thesis was “Carcinoembryonic Antigens of the Human Digestive System”. The discovery of CEA and AFP about the same time set the stage for the field of onco-biomarkers and CEA became widely used as a marker for colon cancer. He became a full Professor of Medicine and Physiology in 1972 and in 1978 he became the first Director of the McGill Cancer Centre. In 1980 he became Physician-in-Chief and Chairman of the Depart-ment of Medicine at Montreal General Hospital. His many awards include: Companion of the Order of Canada, an officer of L’Ordre Nationale du Quebec, the Gold medal of Merit of the Graduate Society of McGill University. He is now the Sir Arthur Sims Traveling Professor to the British Commonwealth and was inducted into the Canadian Medical Hall of Fame in 2010. In 1976 at the fourth ISOBM meeting in San Diego Phil and Garri Abelev received the first Outstanding Achievement Awards of ISOBM, which preceded the Abbot Award.

The Journal and the Constitution. The society started its own journal in 1980 “Oncodevel-op-mental Biology and Medicine” published by Elsevier in Amsterdam, Netherlands.

With the cessation of the contract with Elsevier in 1984, the journal was renamed “Tumour Biology” and published the Saikon Publishing Co. in Japan which was partially supported by the Japanese Ministry of Education. The editors in chief, Dr. Hirai and Monroe Neville wrote “Tumour biology is a synonym of the research in oncology. The new journal will cover a wide field in cancer research from clinical to basic research although its main interest will continue to be in oncodevelopmental sciences” (April 1984). The Managing Editor was David Brock (UK) and then A. Malkin in Canada. The geographical distance between the Managing Editor and the publisher caused many problems. A new contract was negotiated with S. Karger, Basel, Switzerland and the name of the journal changed from “Oncodevelopmental Biology and Medicine” to “Tumor Biology”.

In later years, the journal was moved to Springer and then to SAGE Publishing (https://us.sagepub.com/en-us/nam/tumor-biology/journal202707). As a result of these changes, Tumor Biology expanded from ~70 to ~1,400 articles per year, as shown in the picture taken when the journal was still published on paper. Currently, Tumor Biology is now published digitally as an Open Access journal. The 2016 Impact Factor was 3.65.

Changing publishers also allowed the Society to perceive royalties from its journal. This steady source of income has significantly supported the organization’s functioning and it has given it a solid basis from which to expand.

The first constitution was ratified in 1980 after 3 years’ work of the ad hoc Committee for the Constitution chaired by William Fishman. In 1987, the Constitution was later modified by a select committee to allow more flexibility in publication of the journal. The advances in communications provided by the internet as well as the Society’s official incorporation (see below) have prompted significant modifications to the Constitution by the Board of Directors over a period of several years. The new Constitution will be soon subject to approval by the Society’s membership.

In the 90’s the Society played a crucial role in evaluating and characterizing monoclonal antibodies used in clinical lab tests in its series of Antibody Workshops. In these workshops, more than 300 monoclonal antibodies to a variety of tumor markers including CA125, AFP, PSA, MUC1, Cytokeratins, Sialyl Lea, hCG, CEA, ALP, SCC and S100 have been character-ized.

Renaming the Society. In 2010, the name of the organization was changed to International Society of Oncology and Biomarkers while keeping its acronym (ISOBM), to refocus on the use of biomarkers in clinical oncology. This was largely due to attract the interest of commer-cial application of cancer biomarkers for use in clinical settings since one of the goals of the society is to stress the usefulness of biomarkers in the diagnosis, prognosis and treatment of cancer.

In 2014, and due to increasing revenue generated as royalties from the Society’s journal, the ISOBM was incorporated in the UK as a non-profit organization and it retained a professional accounting firm to carry out the required legal filings every year.

The future. Our society is 45 years young. It has been the cradle of cancer markers. Our founders and members have turned laboratory curiosities into cancer tests that help diagnose, treat and follow up with cancer patients.

But this is still only the beginning. As times change and older problems are solved, and new technologies arise, our Society will continue its mission to better understand cancer and most importantly, to find ways to help patients bearing this terrible disease. We – and those who will follow us – owe that much to the small bunch of curious people who four decades ago decided to get together and discuss some funny behaving molecules.